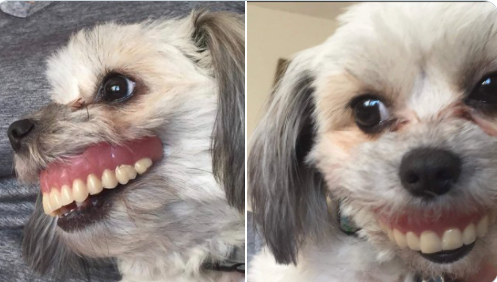 It’s a well-known fact that some people love dressing their dogs up in human clothes, from hats to coats to shoes.

But one man recently got to experience another way in which dogs can impersonate humans after he woke up from a nap to find that his set of dentures were missing.

Assuming he’d mislaid them in the bathroom, he went in search of them only to find his daughter’s dog, Maggie, a Shih-Tzu Chihuahua mix, flashing him a cheerful grin.

Except it wasn’t a normal happy dog kind of grin – it was his grin. His smile. His teeth.

And it was far too hilarious not to share.

His daughter Eunice, who owns Maggie, took to Twitter to share the pictures of the ridiculous results of her dog’s theft of her dad’s dentures.

She wrote: “A few months ago my dog, Maggie, stole my dads dentures while he was napping (his gums had been hurting him so he took them out mid-afternoon) and he found her like this…”

Naturally, the pictures went viral. People can’t get enough of Maggie’s winning smile – although it’s certainly an unusual look for a pooch.

Remembering the hilarious incident, Eunice, who is from Long Island in New York, told the Dodo her father had gone looking for his dentures in the bathroom following his nap, unsure of where they could have got to.

She said: “When they weren’t there, he went searching downstairs and found Maggie under my living room table.

You guyssss! A few months ago my dog, Maggie, stole my dads dentures while he was napping (his gums had been hurting him so he took them out mid-afternoon) and he found her like this. Lmfaooo im deadddd rn remembering this @dog_feelings @dog_rates pic.twitter.com/lz9WIKFJEg

“He sent me a picture and explained what had happened and I was in literal tears.”

Adoring fans of the dog asked for regular pictures of Maggie to know what she looks like when she’s not grinning like a maniac with a mouth full of human teeth.

It turns out she’s just as cute without a set of human teeth – and she’s also partial to a nice warm jumper.