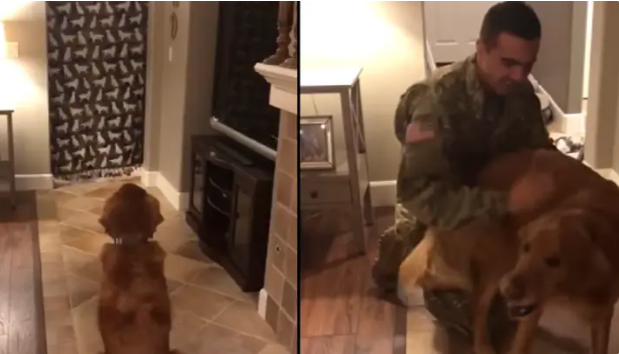 If adorable animal videos aren’t your thing, you might have missed the utterly addictive What the Fluff Challenge that’s taken over the internet this past month.

Now, a video has gone viral which features the return of a doggo’s army dad.

The dog is completely unimpressed with its owner’s attempts at the challenge – but this golden beauty totally loses his cool when the big reveal goes down.

The little pooch’s emotional reaction is enough to make anyone say: “I’m not crying, you are.”

The utterly heat-warming reunion was filmed in Livermore, California, by Lisa Lord, who said: “My son, Private 1st Class Kevin arrived home after nine months in Fort Bragg where he had been training in the Army.

“His leave was granted to come home to see family and friends before he would return back to his base to continue his intense training to begin serving our country.”

Kevin’s younger brother, Jacob, and his mum thought it would be fun to do the #WhatTheFluffChallenge.

She added: “While we were all very excited and emotional to have him at home, no one was happier than our four-year-old Golden Retriever, Zephyr, and none of us anticipated Z’s reaction.”

The challenge, which has led to a barrage of viral videos of animals being well and truly bamboozled by their humans internet, sees people using a towel or sheet and a doorway to ‘vanish’ into thin air.

Basically, it’s a version of peek-a-boo you’d play with babies and toddlers – expect with your furbabies.

However, some owners found if they wanted to give the #WhatTheFluffChallenge a try with their furry companions they’d need to be quick with their tricks.

This has led to some unlucky pet owners sharing videos of their dogs figuring out the game and finding them straight away.

Even better, some owners were left with a pooch completely unfazed by their sudden disappearance antics.

It’s not just man’s best friend that’s been involved with the #WhatTheFluffChallenge, our feline pals have also been drawn into the viral trend.

And they may seem detatched at times, but some of those cats couldn’t keep their cool under the sorcery of the challenge.

Got a story for us? Need to tell us about something amazing you’ve seen or done? Want us to investigate something? Get in touch! Email [email protected] or head to our submissions platform – and you could even earn money for your stories or tips.