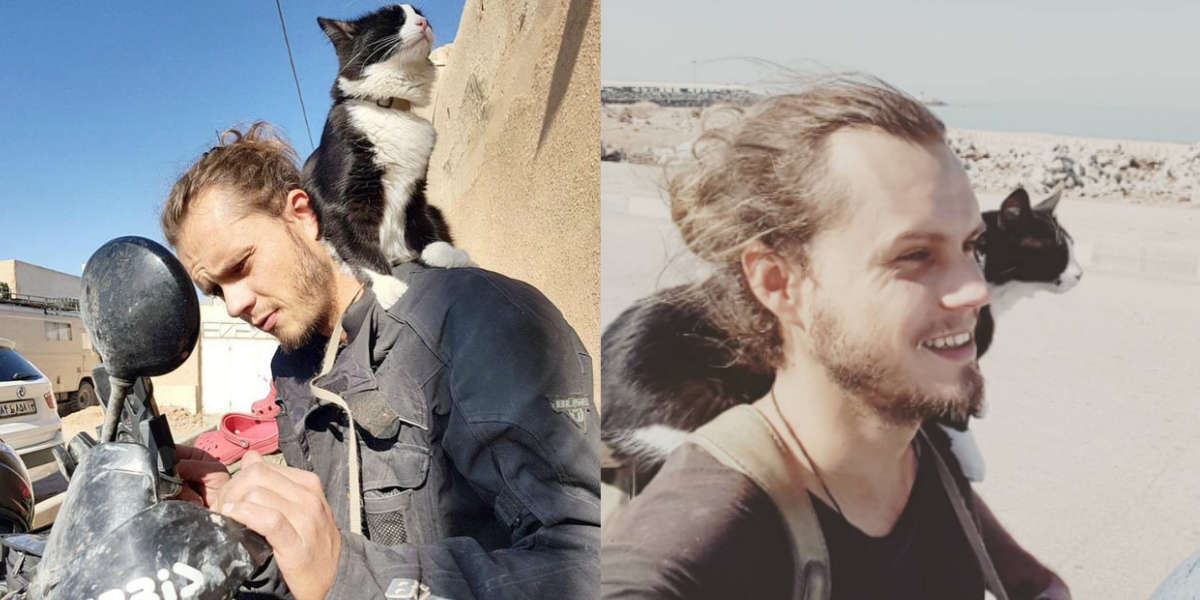 Mogli may have started as an orphan on the streets of Morocco, but less than a year later, the fearless feline is bringing new meaning to the term “adventure cat.”

The little cat is now impressively well-traveled after backpacking through over a dozen countries with her dad, 32-year-old Martin Klauka of Rosenheim, Germany, mostly in the tank bag of his Honda XRV 750 Africa Twin bike. And there are still quite a few faraway places her dad intends on ticking off their joint bucket list.

Klauka never anticipated adopting a kitten. His dream of a more nomadic lifestyle seemed at odds with animal ownership. But on a bike trip with some friends through Morocco in March of last year, Mogli found him, and wouldn’t let him go.“We were sitting in the streets of a small town when a little malnourished cat with an injured tail approached us,” Klauka told The Dodo. “I called to her and she instantly came over, laid down in my arms and fell asleep. Locals who had seen her before told me that her mum got hit by a car and that she, being too young and weak to fend for herself, would most likely die in the streets.”

When Klauka realized the little black and white kitten was too exhausted to even lift her head, he knew he couldn’t abandon her. Though some people mocked him for touching a dirty flea-ridden street cat, Klauka carried her around for the rest of the evening, smuggling her into his hotel room for at least one night’s respite from the elements.

He knew that adopting an animal, especially one so young and frail, would be a huge responsibility — one that he was still not sure he wanted to take on. So he decided he’d make up his mind in the morning.“When I got up, I was still full of doubt, but already in love with that little rugrat, so I decided to put her on the motorbike to see how she would cope,” Klauka explained. “‘It’s definitely not the right place for a cat,’ I thought, but it was either going to be that or almost certain death on the streets.”

Though she was wary of the bike at first, the kitten seemed to calm down after only a half hour on the road. Klauka had found his future travel companion.

In July 2017, Klauka quit his job and hit the road in late August for a road trip of epic proportions. With Mogli by his side, he drove along the Mediterranean Sea to Iran and then into the United Arab Emirates, crossing 10 countries on his way, and reaching Dubai in December.On the road, Klauka and Mogli quickly settled into a routine. While traveling, Mogli stays safely tucked away in Klauka’s bag on the front of his bike, occasionally sticking her head out to watch the passing scenery, or meowing in protest if Klauka exchanges smooth pavement for a bumpy dirt road.

In busy public places, Mogli sits on Klauka’s shoulder, observing new cities, restaurants and shops from her elevated perch, and when they reach their campsite base, Mogli gets to roam the grounds freely, exploring as she pleases. “This is obviously what she likes the most,” Klauka adds, “and after checking back on me a few times to make sure we’re actually staying, she goes off exploring for hours, sometimes even a whole day.”

Whenever they arrive at a new campsite, Mogli goes through a special ritual of checking for dangers, such as cars and dogs, and securing a safe spot, Klauka noted. The little cat’s keen observational skills have come in handy for her owner, especially when Klauka loses sight of the tent, and Mogli is able to lead him back to their homebase.

“Normally she stays near the campsite when I leave to run errands or check out the surroundings, but sometimes when it’s safe and there are no cars, dogs or other cats around, she follows me,” Klauka said. “Most of the time I’m following her, though.”

Traveling for months on a motorbike with a cat has often been unpredictable and full of unique challenges. Klauka has had to miss out on certain not-so-cat-friendly events and sights, faced complicated border-crossings, and has been kicked out of more shops and hotels than he can count. Finding accomodations has been a constant struggle for the pair, who have had to sleep in freezing deserts when no place would allow them inside.

But despite the countless sacrifices Klauka has made for his best friend, it has been worth it.“I’m happy with where I am in my life and happy to have taken her,” Klauka added, “happy to have gotten through all of this.”Now that the first leg of their trip is complete, Klauka is working in Dubai, with plans to press on through Pakistan and India this summer. While he and Mogli are taking a much-needed break at the moment, there will surely be many more adventures to come.