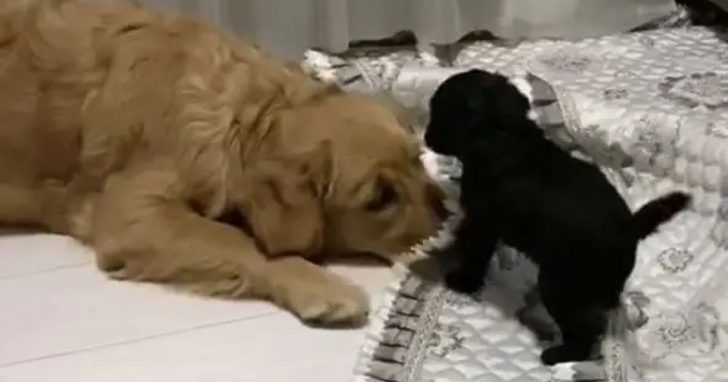 The baby of the household rarely ever wants another little guy (or gal) to appear in their territory. That said, both human children and pets tend to react in a negative manner when their parents permanently bring another baby into the household. Jealousy, anger, sadness, or even stress and anxiety are not uncommon once they notice they’re getting less attention. They often begin to feel lonely and make the presumption that they’re being replaced for good.

Pork, the golden retriever, reacted differently when his human mom and dad brought home a tiny, black rescue puppy named Teddy Sugar (cutest name ever, by the way). Instead of delving into a deep internal rage, the goldie was thrilled to meet his new baby sister whom he’d be now sharing a home with.

Pork’s owners even filmed a video of him meeting Teddy Sugar for the first time!

The first thing the retriever did when he saw the puppy was give her tons of sniffs. In case you didn’t know, sniffing for dogs is like handshaking for humans. It’s an appropriate and necessary way to meet someone new.

After the initial meet and greet, Pork, who appeared both anxious and excited, started to get closer to Teddy Sugar. But seeing the small canine move around was a little intimidating for the retriever in the beginning. He’s probably thinking, “Is this thing really alive? Will it hurt me?”

But in virtually no time, Pork learned to accept and get comfortable with the new addition. He tried to play with her, let her attempt to nurse on his face, and by the end of the video, even let Sissy sleep next to him. D’aww!

I think if I were a dog, I’d react in a similar manner as Pork. It’s exciting to have a new youngster in the house, but it’s also a lot to take in.

But I think it’s probably harder from a canine’s perspective. You can’t help but think whether or not the new dog has good intentions or not. Will they steal your food, water, and treats? Will your owner stop playing with you and taking you on walks now that their focus is on the new fella? Perhaps Pork was feeling all of that plus more. It did seem like he was dealing with an emotional tornado. He was a bit shy, nervous, hesitant, skeptical, and exhilarated all at once. Completely understandable.

Watch the golden retriever go from anxious from the first time he laid eyes on Teddy Sugar to total best buds!