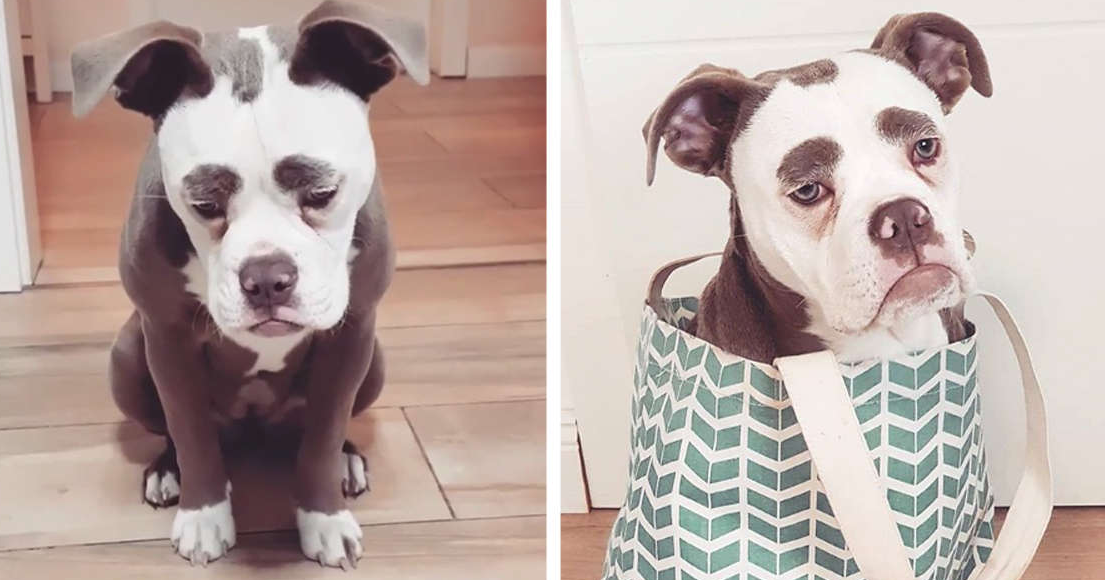 Upon entering the world six months ago, this adorable little English bulldog puppy appeared to already be pretty disenchanted with it all — her face conveying the uncanny expression of someone disappointed by nothing short of existence itself.

And the pup’s crabby countenance has yet to fade. It was something her owner, Janina, noticed right away.

“She always looked sad and had eyebrows,” Janina told The Dodo. Thus the pup was named Madame Eyebrows.

Indeed, the dog’s eyebrow spots do give her a distinctly crestfallen sort of look — like the face of sad clown wandering off dejectedly after ruining a little kid’s birthday party.

Can anything cause this pup to look pleased?

This can of puppy food, perhaps?

How about this lovely flower?

What about this tote bag?

“She is very happy,” Janina told The Dodo. “She wiggles her tail, gives kisses.”

Turns out, Madame Eyebrows is actually a bubbly little ball of love. It just might not seem like it in photographs.

“In real life, you have to see her only a few minutes and you see that she is happy,” Janina said, adding that her husband agrees. “We don’t see only her sad face. We see how funny she is! And how much love she gives to us.”

As is often the case, there’s more to Madame Eyebrows than meets the eye.

There are a handful of occasions where the sad-faced pup does achieve a happy expression.

Sure, the rest of the time Madame Eyebrows might look down in the dumps — but appearances aren’t everything, especially for a pup with such a big, friendly heart.

And in the end, that’s what makes her perfect.