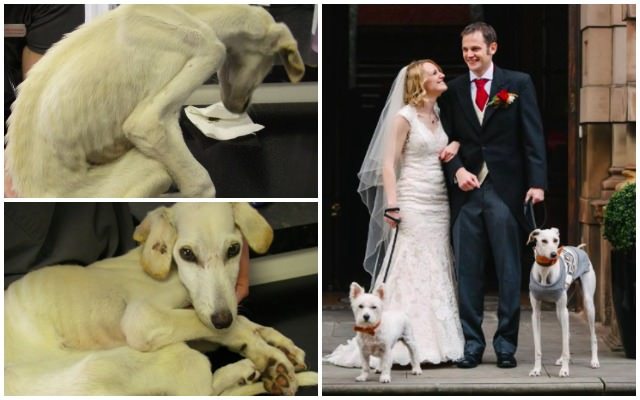 When a puppy was found on the streets of Coventry in the UK, he was so emaciated, his rescuers weren’t sure if he’d make it.

The RSPCA took the Greyhound / Saluki mix into their care in September 2015, with the puppy only weighing 6.5 pounds.

“He looks like a walking skeleton,” said RSPCA Inspector Nicky Foster in a story by Daily Mail. “He is the thinnest dog I have seen in the 10 years I have been an inspector. You can see every single bone in his body.’

Although the pup was almost too weak to stand, he somehow had enough strength left to fight for his life.

Soon after being rescued, the dog, named William, was given a home by Rachel Butler. Over the next year and a half, she fed and loved him until he gained his strength and weight back. In fact, William weighs almost five times he did when he was found, having gained 24 pounds!

Almost a year and a half later and with his health in check, William was given a very important job to do: he was the ring bearer at his human’s wedding to fiancé Chris Mallett. Together, the dog-loving couple tied the knot with their two pups in tow.

“Having William at the ceremony made us both feel so proud at how far he has come,” said Butler in a story by Sunday People.

As for the pup’s former owners? They were tracked down and admitted to “causing unnecessary suffering,” according to Daily Mail.

“Rushton, 37, and Hales, 29, from Henley Green, Coventry, had bought him on impulse after seeing him advertised for sale on the internet but had no idea how to look after a puppy,” the article reports.

The couple was given a suspended prison sentence in order to fulfill 35 hours of unpaid work, and are banned from owning animals ever again.

It’s a miracle that William found his way into the right home. Along with his humans and pup sibling Harry, an 11-year-old West Highland Terrier, this beautiful pup is living his best possible life.