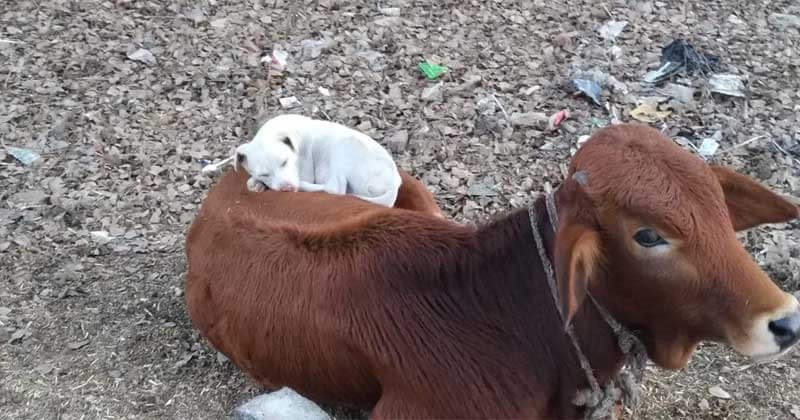 Dogs love their sleep, and it seems like they can curl up for a nap anywhere they like.

Sarthak Gambhir was leaving his home in Jhansi, India, when he spotted an irresistibly adorable sight: a dog and cow taking a nap together.

The cow had laid down to sleep when she was joined by a little dog. But it wasn’t any ordinary nap. Instead, the dog decided that the cow made a fantastic pillow, and curled right on top!

A man named Sarthak Gambhir, from India, was leaving his house when he spotted a cow that caught his attention . The cow itself wasn’t unusual—they’re a common animal in his neighborhood—but rather what was on the cow’s back:

There was a dog, sound asleep, cuddled up on the cow’s back!

It’s as if he just decided the cow would be a warm place to curl up (that cow does look pretty cozy) and decided to make him his cuddle buddy.

Gambhir had never seen anything like it before, so when he spotted the unusual pair, he had to take some pictures.

And the cow doesn’t seem to mind—he’s just sitting on the ground, not wanting to disturb his new pal’s sleep. It’s a beautiful example of two different species working together.

It’s not clear how well the animals know each other, whether this is a one-time thing or a regular arrangement, but it took Sarthak by surprise.

“It was the first time I was seeing something like this,” he told The Dodo.

Sarthak had to go on his way, but not before taking a few precious photos of the pair… which went viral after he posted them to the Dogspotting Facebook group.

The post currently has over 19,000 reactions and 2,000 comments, with everyone commenting how adorable the photos are.

What adorable photos! We hope that dog had a very nice nap with his very patient new friend!